Indigo, Art and Design–The Allure of The Blue Mansion 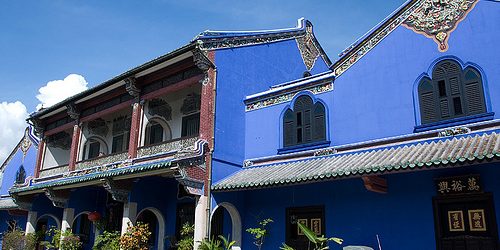 I had recently returned from Penang, an island in Malaysia–the inner city of its capital, Georgetown, is an UNESCO World Heritage site.

On our final day there, we visited the Cheong Fatt Tze Mansion, also known as “The Blue Mansion”, built in the 1880s, it was the home of an illustrious Chinese businessman, Cheong Fatt Tze who had decided to settle his family and future generations in Penang, and so built a house that would accommodate nine generations of his family. Restoration works done in the 1990s by artisans and architects was so successful that it won an award from UNESCO for Culture Heritage Conservation in 2000. 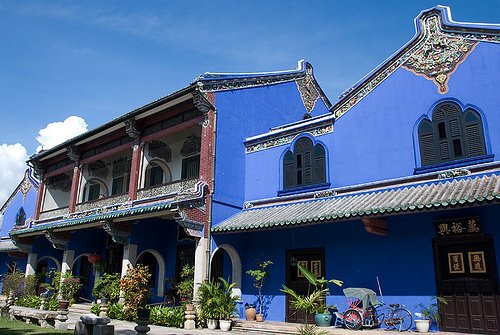 The striking Blue colour of the mansion can be seen from the main road, adjacent to the mansion’s street.

During the tour, the mansion’s guide informed us that the house was painted with Indigo, a natural dye that was widely available at the time the mansion was built.

Combining the best of the East and West in Art, Architecture and Design that was available at that time, the mansion has an eclectic style. The owner had sourced for the best items from around the world (Cast Iron pillars from Scotland, Stained Glass windows from France), and Chinese Art, Chien Nien, which translates to “cut-and-paste” in the Chinese language–where chips of porcelain are pasted together, made into elaborate patterns and even displays depicting Chinese Life. 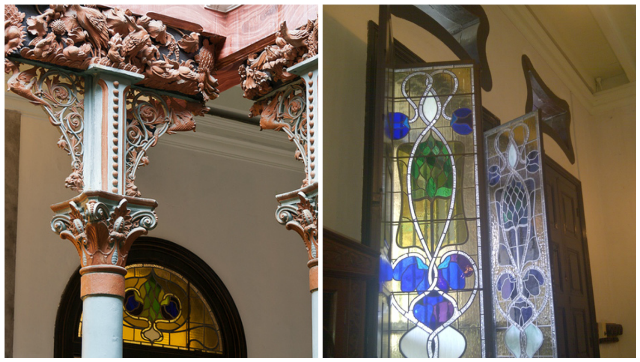 The house was designed with fengshui elements, built in perfect symmetry to the source of energy at the centre of the house, and Yin-Yang symbols were incorporated into the window louver frames.

For film lovers out there, here’s a little trivia–a Singapore film, a fictional story of family intrigue by Glen Goei was filmed at and titled for its namesake “The Blue Mansion”. And a scene from Indochine–the Oscar-winning Best Foreign Film of 1993, that starred the most famous face of French Cinema, Catherine Deneuve, was filmed at the Cheong Fatt Tze Mansion. In fact, the production crew decided to leave the Indochinese rickshaws, as a gift to The Blue Mansion.  Although not originally found at the mansion, it seems in line with Penang culture and heritage. which probably explains why it is a popular photo subject for the visitors (even me). 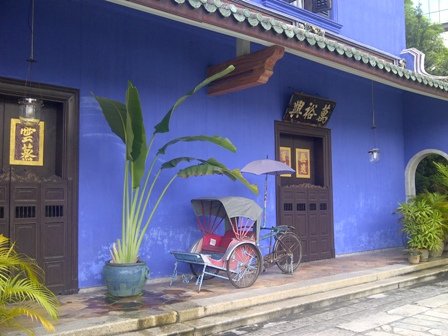 I’d say this visit and tour of the Cheong Fatt Tze Mansion (The Blue Mansion) was fascinating! It was a wonderful experience to view and listen to the nuggets of information about its history, and the medley of architectural and design elements based on Art and Science, drawn from Eastern and Western cultures.