Why I Love Cooking Thai 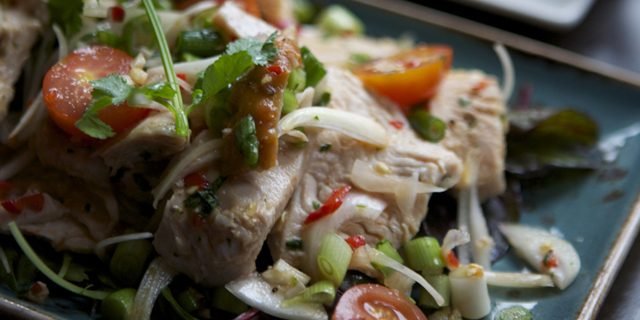 It was about a month ago when a client noticed from my Facebook posts that I enjoy cooking, especially Thai food. She proceeded to say:”I love Thai food!”

So many people do. I suppose we all love Thai food because of the complexity of flavours: Sour, Sweet, Salty, Spicy and Bitter.

My learning journey with Thai food started in 1998. I was successful in cooking Western and Japanese cuisines and thought “No sweat, it’s time to try cooking a new cuisine.”

I’ve always loved Thai Food, so I bought a Thai cookbook from Borders and started studying the recipes… “Serrano Chillies”, “Holy Basil”, “Sweet Basil”, “scrape fish meat”. So what are Serrano Chillies (are they Red or Green? Small or large? How can I tell between Holy and Sweet Basil, where do I get them from and how on earth does one scrape fish meat?) Remember… this was 1998, so Google Images and YouTube wasn’t available then.

The first Thai meal I cooked was a complete disaster! The Thai Fish Cakes were waaayyy too salty because “scrape fish meat” was an impossibility for me, so I bought ready-made  fish paste –turns out it was already salted.

A couple of months later, a colleague asked if I would like to go for a Thai Cooking Course. After my failed attempt, I was really keen to go. We would learn how to make items like Tom Yum Paste, Green Curry Paste from scratch. (Of course now, one can buy really good Thai pastes from supermarkets, but again, this was… 1998).

I bought a Thai cookbook by David Thompson, it had no photos in it. Thai Cooking was tough enough, I couldn’t fathom how to cook with the recipes without knowing what the end product looks like.

In 2001, I was working and living in Bangkok. I loved the food and was intrigued as every dish seemed to “sing” and were so complex yet perfectly balanced.

10 years later, in 2011, when I found myself missing, craving and sometimes dreaming about the Thai food I ate in Bangkok, I knew it was time to take matters into my own hands.

I would embark on a personal project to take 1 whole year to try cooking all the Thai dishes I love or was curious about.

I pulled out every Thai cookbook from my book shelf, and started cooking. Only after some moderate success did I dare venture to my David Thompson book. After cooking using many Thai cookbooks, Patara, The Blue Elephant Cookbook, David Thompson’s book remains the most challenging. He advocates using traditional methods of Thai cooking–complicated multi-steps. It is also through his methods that he, an Australian, has won the respect of the Thais (he owns Nahm an award-winning Thai restaurant, at the contemporary luxury hotel, The Metropolitan Bangkok by the COMO Group) 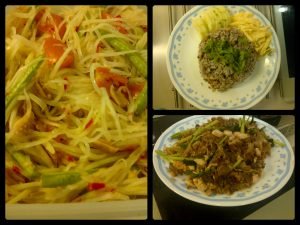 Life is like Thai Food. Complex and there are NO shortcuts.

Why do I love cooking Thai food? I think it’s because it’s a new challenge every time.

Unlike other cuisines, when you can just follow the recipe, the only variable being “add salt to taste”, in Thai Cooking, there are so many variables… the sourness and bitterness of the limes you are using, the ripeness of the Green Papaya, the heat of the chillies. I would have to achieve balance of the Sour, Sweet, Salty, Spicy and Bitter; in the face of all these different variables. Every time I cook, it’s a different experience.

Then I decided to set myself a huge goal–to cook a full Thai Dinner for my friends Sunil and Parita (she’s Thai), before they moved overseas for work. Phew, it was a success!

One day he commented via Facebook that my love for cooking must have a link to my work as a PR Consultant. I think he’s right! It’s a balancing act of so many variables, variety in the different experiences, while being so very interesting and fulfilling throughout!

Indigo, Art and Design–The Allure of The Blue Mansion
July 4, 2013